A simple way to control odors in your refrigerator and home. 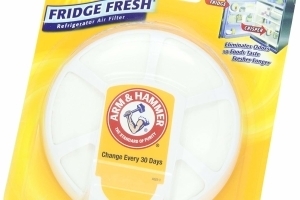 Arm & Hammer Fridge Fresh Refrigerator Air Filter
$11.00 Buying and opening a traditional box of baking soda and putting it in the fridge is equally as effective, but these filters have suction cups on them and don't take up as much space in your fridge. With the larger service area it's a bit more effective, about the same price and they look a bit better as well.
Action Options
Add to Calendar